This is the most starkly disturbing question for us in the midst of the current global pandemic crisis that is aggravating the Ecocide of the Climate and Ecological Crises being forced upon us in the Global South mainly by the extractivist plundering transnational corporations and their puppet governments and other state and non-state Establishment actors of the Global North.

With the above posting on Neocolonialism in Ghana today, and the description of the actual situation now in India in the very apt article at https://www.bbc.com/news/world-Asia-India-52002734, there ought to be clearer understanding of what XR All-Afrikan Affinity Network (XRAAAN) Activists in Afrika and elsewhere throughout the Global South are being confronted with at present!

That we of XRAAAN in Afrika, like our other Global South colleagues of XRANA in Asia and XRRAAYS in South Abya Yala are, even worse than

before, currently being endangered by speedily aggravating lethal challenges, must be obvious to all at even cursory glances at our present situation throughout the Majority World.

Foremost, in increasing danger are those of us choosing to be at the combat posts of our Mother Earth Defence Frontline of Indigenous and other Communities of Resistance, particularly those of us working on Movement of Movements building to address not just the Climate and Ecological Crises but also the key outstanding Decolonization matters of Community Self-Empowerment, Self-Determination and Self-Emancipation by way of Pan-Afrikan Liberation in quest of Planet Repairing Global Justice for all.

Hence our serious concerns about the weaponization of things like COVID-19 to become an Ecocide instrument of Eco-Fascism for the long sought Depopulation of our still colonised and arbitrarily foreign power balkanised and deliberately weakened in disunity territories.

Deliberately so weakened in disunity, in order to more easily effect the Final Solution of the genocidal clearing away of all our 'Wretched of the Earth' to make the planet a more secure place only for those in the privileged Global Apartheid service of White Supremcacist Racism!

That is why there can be no reliance upon irresponsibly unaccountable elitist governments and those who have long been advocating, aiding and abetting Empire 2.0 Revanchism and promoting sinister agendas of Depopulation. More so applauding and seeking to present them rather deceitfully as 'White Saviours' coming to the rescue of the masses of our 'Wretched of the Earth' in and beyond the Global South with "taali-thali charity"!

Among our topmost survival needs in Afrika now is for genuine Internationalist Solidarity to strengthen the regenerative Community Self-Defence of indigenous Communities of Resistance and their frontline Activists and their own independent organizational forms, networking processes and diverse modus operandi of not only open above ground legal but also semi-clandestine and even illegally clandestine Rebellion!

This means supporting XRAAAN to go further in opening what we call "Honest Consciencist Dialogue of UBUNTUDUNIASEMKA" with all those who have long been engaged throughout the continent and diaspora of Afrika in persistent Freedomfighting for human, peoples and Mother Earth rights, including sovereignty, integrity and power to redress, with their own self-respecting agency, inequalities and other iniquities of Global Injustice through authentic Decolonization, Intersectionality and Pluriversality.

Practically, this requires first and foremost the adequate resourcing of XRAAAN and its Movement of Movements building Activists at the grassroots of indigenous and other Communities of Resistance to be able to reconnect, more so in these times of social distancing, mostly online and with the necessary social media and communications technological equipment.

We therefore have greater need now for more new and also properly refurbished secondhand android mobile phones, laptops, tablets, video and audio recorders, cameras, solar chargers, projectors, printers, loudspeakers, amplifiers, microphones, as well as memory cards, indeed, everything necessary for effectively tackling the problem of the ever increasing Digital Gap between the low-consuming peoples of the Global South and the highly overconsuming peoples of the Global North. 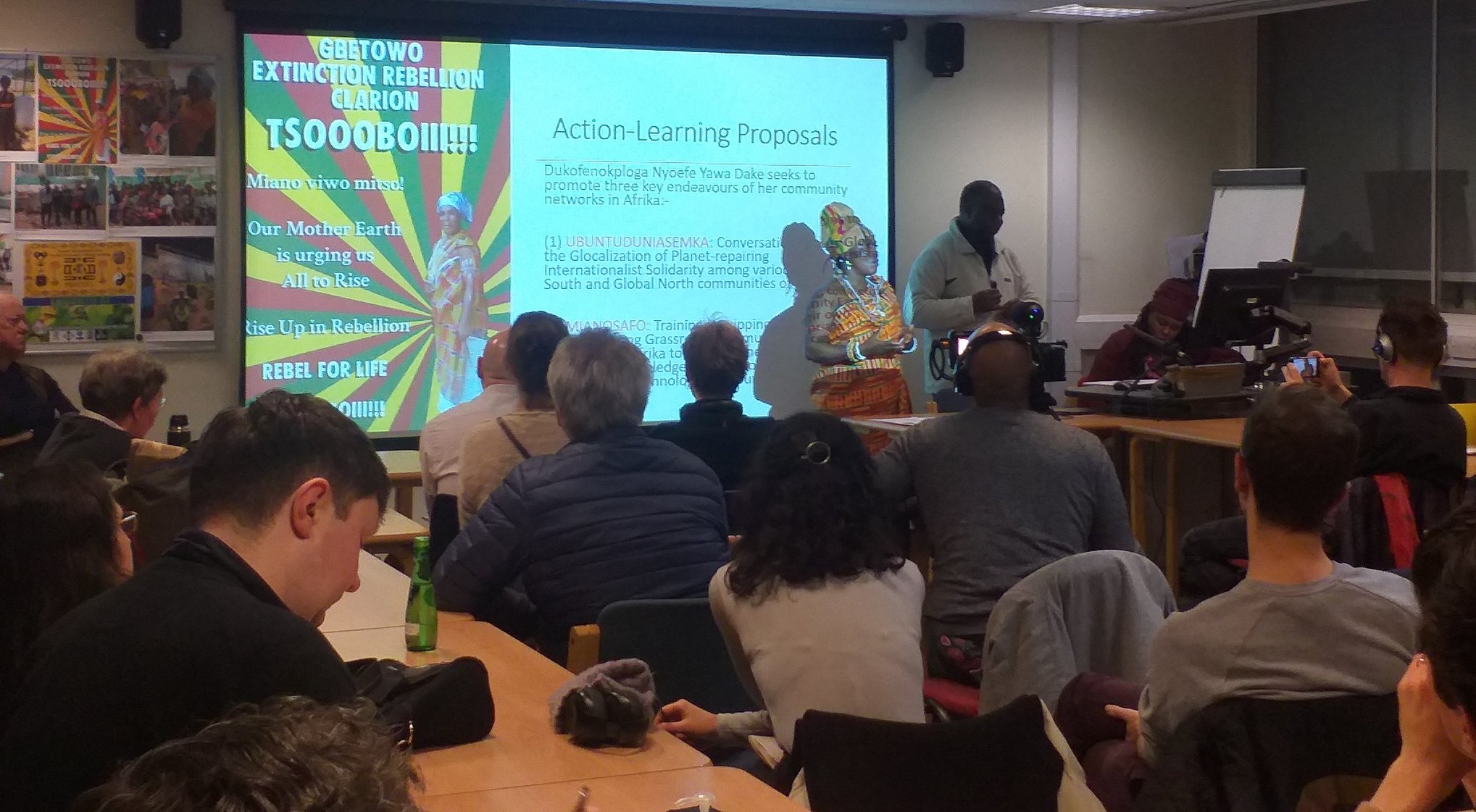 Proactively supporting our XRAAAN project endeavours like the NUTROZA and the MIANOSAFO, which Dukofenokploga Nyoefe Yawa Dake highlighted during her Tuesday, 3rd March 2020 presentation at the University College London Radical Anthropology Group (UCL-RAG) forum, will enable us to better address such needs more satisfactorily.

Another vitally important thing to do is to support the expedited completion of building the Miano Asase Yaa Community Educational and Sanctuary Complex (MAYCESC). For this MAYCESC to more quickly serve its purpose not only as the homebase of our XRAAAN International Coordinating Secrerariat but also to become the operational managemen

We are, in XRAAAN collaboration with the XR Affinity Science and Technology International Network (XRASTIN) and the LIPWETE Radical Internationalist Network of Scholar-Activists (LIPWETE-RINOSA), currently identifying more PIFICOLL Co-Learning Facilitators for training for this purpose and shall welcome all useful support to enable their integration into our services.

Among the most important steps forward is also providing support to frontline Activists to progress our XRAAAN efforts of groundup Movement of Movements building, particularly their advancement "from Grassroots to Global Citizens Assemblies, as the most effective way to now do things in the best peoples' self-empowering interests of all the 'Wretched of the Earth' ".

To this is inextricably linked our XRAAAN efforts of working together with XRANA and XRRAAYS and XRISN upon the establishment in schools, colleges, universities and various other mural and extra-mural Spaces of Community Lifelong Learning, the Global Citizenship Educational Student Assemblies (GCESAs) to hold periodically regular glocally interconnected sessions of the Model United Nations Youth Internationalist Parliament of Humanity (MUNYIPH).

Towards this objective, we need support to expedite our XRAAAN work on the demand some in XRISN have been making to ensure the Movement of Movements building process advances with the very important proposal to galvanize the widespread setting up of interconnected Glocal Assemblies for Planet Repairs Action (GAPRAs).

As some in XRISN have explained, such an UNGCA, comprising members chosen by sortition in every country, will serve the purpose of making appropriate Climate and Ecological Emergency policies that will, through the facilitation of the United Nations, of course with very transparent grassroots International Community checks and balances of participatory democratic accountability, equitably involving communities of indigenous peoples, become binding upon everybody throughout the World.

Jamie Kelsey Fry, from the New Internationalist writes his perspective on XRISN History

Why I as a Reparations Activist Participated on XRs Rebellion Day

XRISNUK History and Current Work - May 2020